There are two memorials to the Jews who perished here during the Holocaust. A matching memorial is placed outside the cemetery, with a plaque from the Belarus Ministry of Education.

Some of Dalhinev’s original shtetl neighborhood is intact, with the typical pattern of Jewish houses near the market square, and Christian houses set further back with a side entrance. A door in the front of the Jewish houses allowed for a small shop to be run, with room for the family on the opposite side. 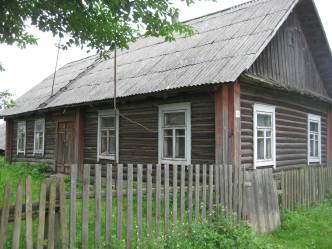 Dokshitsy
The fourth shtetl we visited, a few miles down the road from Dalhinev, was Dokshitsy. Our touring group families have roots in both Dalhinev and Dokshitsy. A further coincidence: my great grandfather was a coachman (and cattle buyer) in Dalhinev; their great grandfather was a coachman (and cattle trader) in Dokshitsy! They were contemporaries and very likely to have known each other—and probably shared a drink or two during their long journeys with horse and cart!

The Jewish cemetery of Dokshitsy was originally in disarray or destroyed, but thanks to a truly dedicated man, Aaron Ginsburg, and the Friends of Jewish Dokshitsy, the surviving grave markers have been restored and a memorial created. The Dokshitsy district is maintaining the site. Aaron has created a Website dedicated to this shtetl: https://sites.google.com/site/friendsofjd/

Across from the cemetery is a pit with memorials to those murdered at the site, where Germans shot their victims. The two memorials at this site illustrate the disagreement in countries including Lithuania and Belarus on how best to adequately interpret the mass murders. The Soviet era memorial is in honor of the “Soviet heroes” and does not mention Jewish victims. The Soviets under Khrushchevdecided that Jews were simply Soviets when it came to the victims. The smaller memorial, in Hebrew and Belarusian, makes clear that this was a Holocaust site and specifically explains that victims of the massacre were Jewish. This monument was erected by The Friends of Jewish Dokshitsy in memory of its Jewish community.
On the drive back to Lithuania, we make a stop at Glubokoe, a large town with what appears to be a business district. We request a “shopping stop” to spend our rubles, but end up at a small grocery/liquor store where I manage to buy some boxed Russian chocolates for less than $3. The journey continues through lovely countryside, with occasional rain showers that have turned up over the past two days. 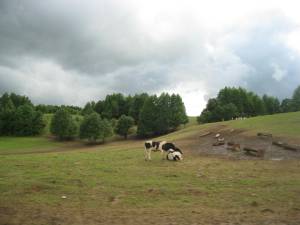 Each Belarus town has had some things in common: a large statue of Lenin in the town center and a Soviet memorial to the town’s war patriots, with fresh and colorful flower displays.

As we approach the border Loreta becomes increasingly agitated, though few cars are in line and the wait is much shorter to cross into Lithuania. Border security soldiers, in uniform with rifles, inspect the trunk of our car. Once we’re back in Lithuania, Loreta is visibly relieved. We learn why when she proudly announces that she’s smuggled extra cartons of cigarettes back (which had cost less than half in Belarus).

This visit to Belarus has been fascinating and thought provoking, and I would like to return there. Although it is a poor country with a communist dictator, it is a beautiful country—one can imagine that it did not look much different a century ago. In some aspects there appears to be personal freedom: some homes have satellite dishes, the young people dress fashionably, and I was told that there is open Internet access, in contrast to mainland China which imposes a firewall. On the other hand, the government does monitor access and restricts sites critical of Lukashenko. I’m very aware that there is much that I do not know.

My family members who crossed the Atlantic to Ellis Island may have been shocked at the poverty and overcrowding they encountered upon their arrival in New York City, in spite of their own difficult living conditions in Belarussia. But there is no doubt that they were grateful for the freedom they found in America.

Thank You to Peggy Freedman who was a great trip leader, and Howard Margol who has done so much for the Lithuanian Jewish Community! 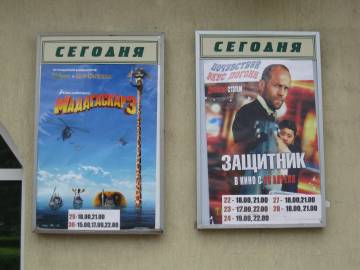